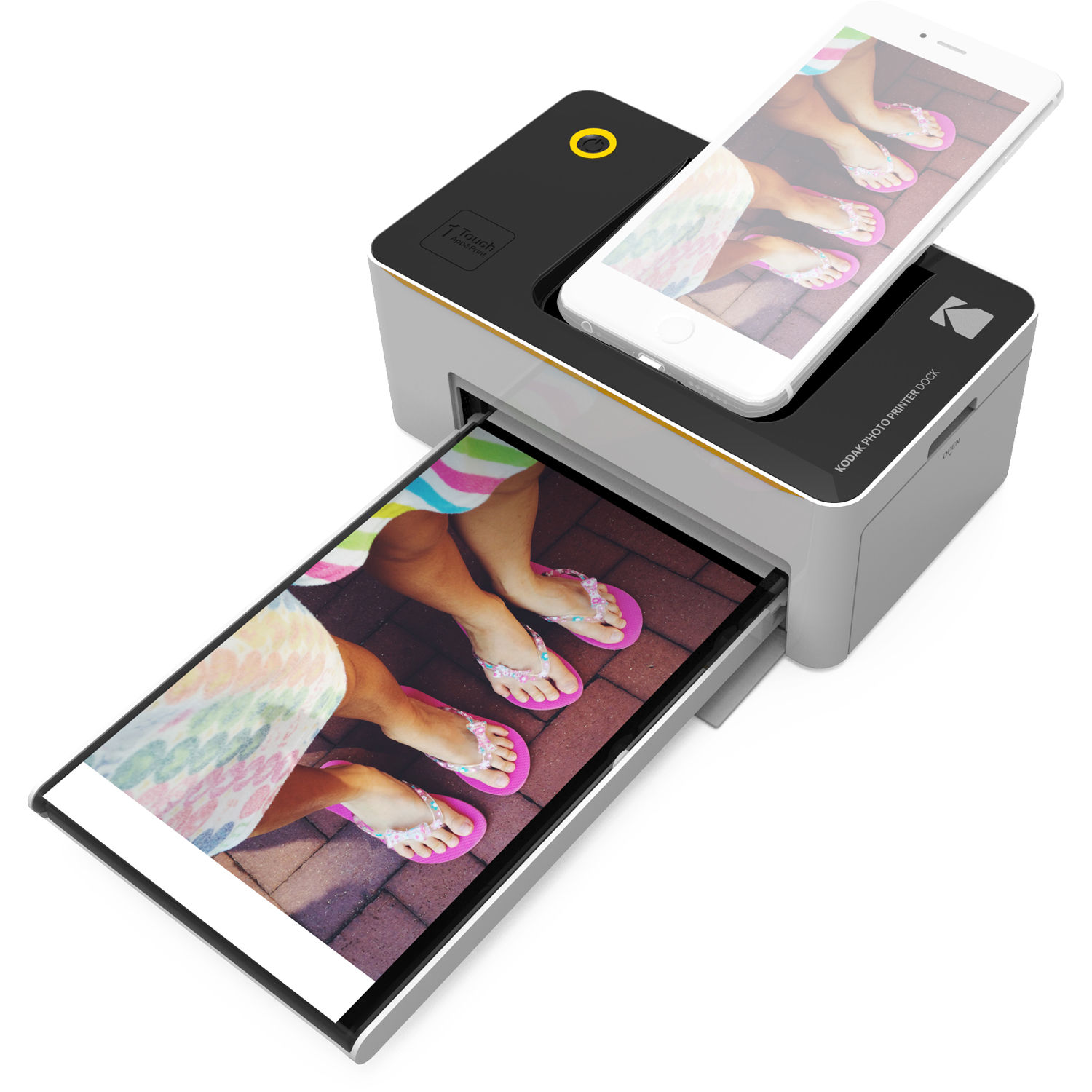 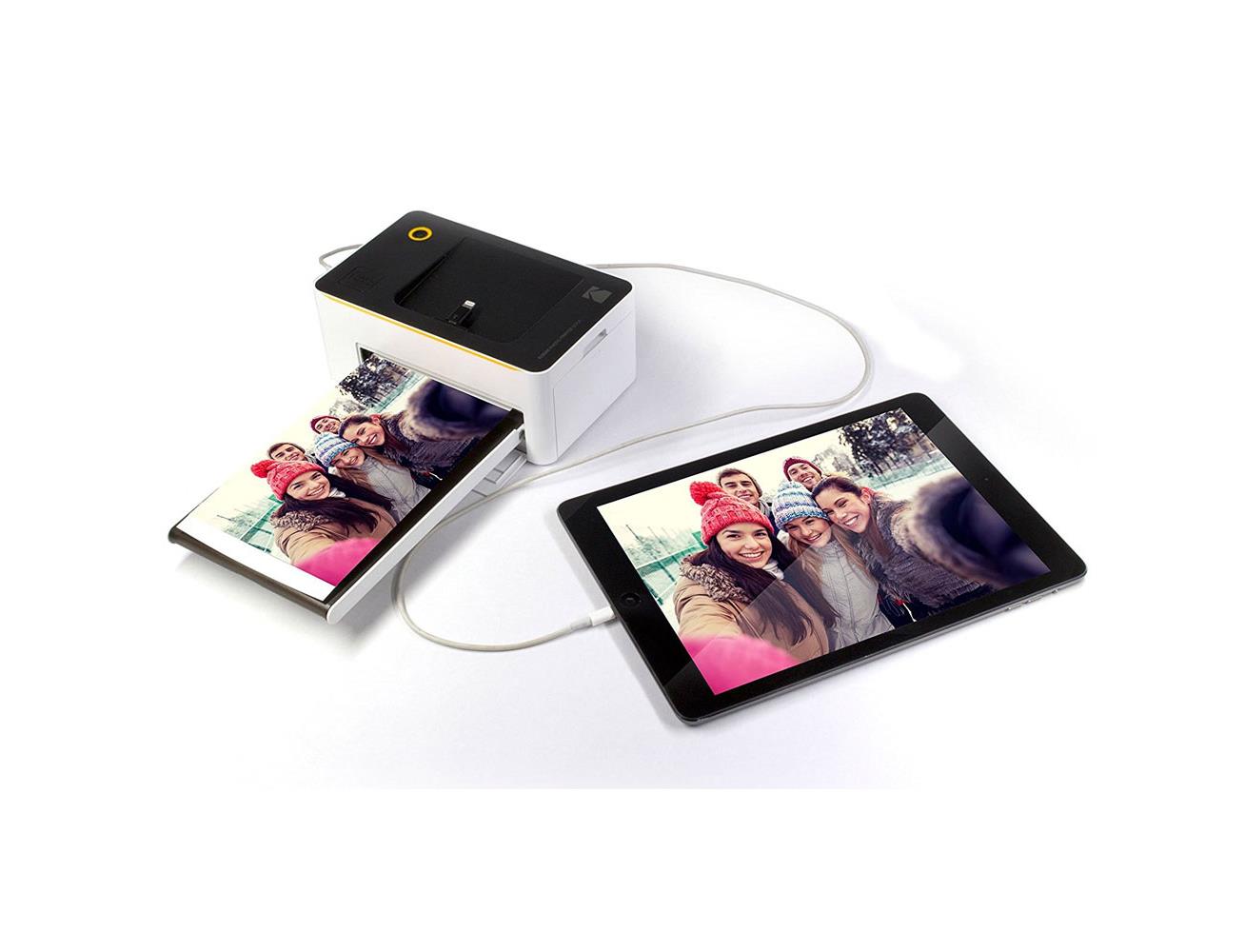 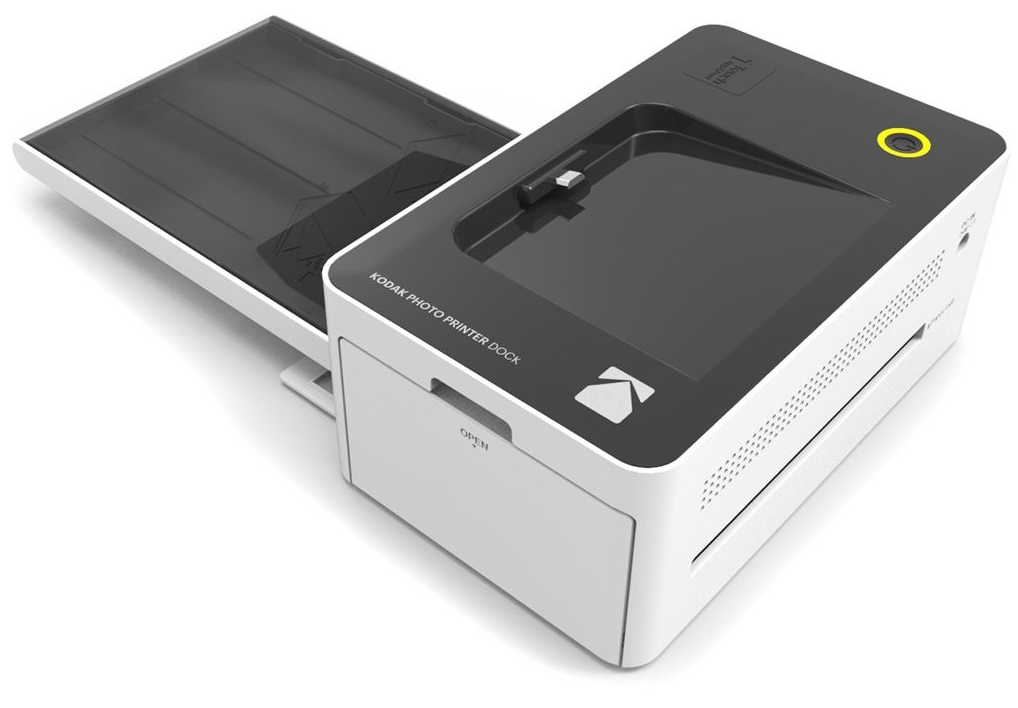 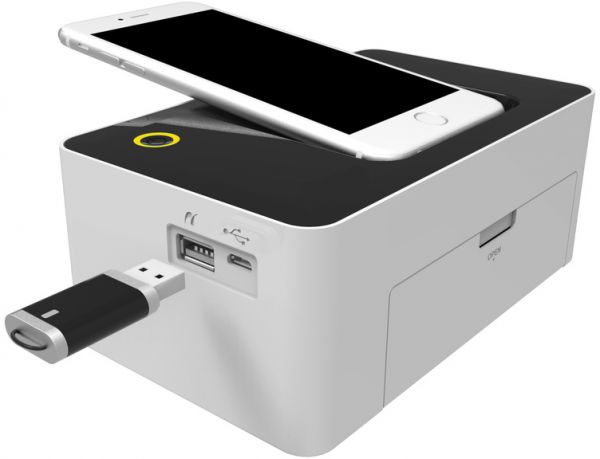 Dedicated photo printers like the Kodak Photo Printer Dock  fill a niche, and imaging giant Kodak has played a prominent role in the snapshot-printer market. The Kodak Dock is very easy to use—which is what a lot of people consider important with these printers—and it turns out decent-looking photographs. It also comes with several impressive and useful features, such as smartphone charging. If finding a way to print good-looking photos simply and easily, especially from your smartphone (and perhaps on the go) is important to you, this Kodak gadget is a nifty little printer designed to do just that.

Out of the box and disassembled, the Dock measures 6.5 inches from side to side, 2.7 inches high, and 3.9 inches from front to back, and it weighs 1.7 pounds. After you connect the paper tray, though, its depth (front to back) nearly triples.

There's a recessed area on top with a micro-USB port protruding just above the recess. This is the "dock" for cradling your smartphone and connecting it to the printer. Kodak also includes a micro-USB-to-Lightning adapter for connecting an Apple iPhone. The indentation is wide enough to hold most smartphones, including the Plus-size iPhones.

As mentioned, your smartphone (and the Kodak Dock app) act as the control panel, and a rather sophisticated one at that; it's much handier than anything Kodak could have installed on the printer itself. Its actual physical control panel consists of two buttons, Power and Print. Encircling the power button is a status LED that flashes in various colors and patterns that denote specific states, such as printing, error, and paper-tray empty. The LED flashes yellow, for instance, when the Dock is printing, or red to indicate an error. In all, eight or nine status states are announced by the LED in flash-and-color combinations.

In case it isn't clear, you not only dock your phone to the Dock, but you can also tether your smartphone to the Kodak Dock with the combination charging/data cable that came with your phone or tablet (or, of course, any cable compatible with your mobile device). For the most part, you get the same functionality by tethering your smartphone that you do from docking, with one exception: on the left side of the Dock there is a USB port.

In addition to printing from your smartphone, you can also print from USB thumb drives, which you can navigate through with your docked smartphone. In other words, since the Kodak Dock has no control panel of its own, you must connect the phone through the dock to access the flash drive, unless, that is, you connect your phone or tablet to the Dock via Wi-Fi Direct. As with most Wi-Fi Direct devices, the printer shows up in your list of available Wi-Fi connections; you connect to it as you would a Wi-Fi access point. After you select it, the Dock will prompt you for the password, which you'll find in the included user manual.

We talked about the USB port on the left; let's look at the other sides. Up front is where you connect the input tray to the printer. It protrudes more than 6 inches, and the top cover seconds as the output tray. On the right side, you'll find a small door that covers the compartment where the dye-sublimation ribbon cartridge goes, which we'll discuss in more detail a little later.

On the back is a slot that the paper travels through, back and forth, as it passes beneath the print head, where it gets layers of ink applied (in four passes): yellow, magenta, cyan, and a clear coat. Also on the back is the AC power jack.

As you can see, the Kodak Dock is a tightly engineered little printer. Also notable is the software that you use to interface with the Dock, the Kodak Printer Dock app. It's available at both the Google Play Store for Android devices and Apple's App Store for iPhones and iPads.